Globetree is the first NGO in Sweden to receive UNEP - Global 500 Roll of Honour Award. The Award Ceremony takes place in Adelaide. The Prime Minister and many other dignitaries are present.

On World Environment Day, 5th of June, Kajsa Dahlström, President of Globetree received UNEP Global 500 Roll of Honor Award in Adelaide, Australia.
Quotes from Kajsa’s report;
“It was a week with the Red Carpet rolled out from early morning till late at night! A week, which will stay in my heart and mind! It was indeed very special to be honored with such a prestigious award and to receive international recognition for Globetree and for me personally to be a VIP!
The Banquet and the Prize Ceremony was the highlight of the week. UNEP Deputy Executive Director Mr Shafquat Kakakhel together with Hon Minister of Environment Mr Ian Evans in the presence of Prime Minister John Howan handed over the medal. The Prime Minister of Australia and many other dignitaries were present.

UNEP Global 500 Roll of Honor Ceremony is celebrated in a different city each year on World Environment Day since 1974. Before going back home to Sweden I asked the UNEP team if Stockholm could be the host if the Ceremony in the year 2002, and the laureates join the celebrations planned for the 30th Anniversary of the Stockholm Conference. The response was positive. I was very happy to be invited to a Meeting with the Swedish Minister of Environment, Hon. Kjell Larsson, short before his summer vacation started. In that meeting I presented the plans for building the Future Vessel on World Environment Day 2002 and my discussions with UNEP about having Global 500 Roll of Honor in Stockholm at the same time. Mr. Larsson was positive to the idea. I cross my fingers that formal decisions and an official request will result in Stockholm being the host of World Environment Day and Global 500 Roll of Honor 2002!

The Global 500 Environmental Forum
When you are presented with the Global 500 Roll of Honor you also automatically join the membership of the Global 500 Environmental Forum which promotes
· awareness among grassroots organizations by publicizing and
supporting their outstanding achievements
· provides superlative role models to young people
· maintain a database and serves a networking function as a source of advice and information on environmental issues and projects
· supports the activities of UNEP through the agency of its
Laureates around the world. Initiates local, regional and global activities that stimulate broader community action.

The Globetree is now a member of this very special network of concerned people, organizations, companies and municipalities who strive for environmental peace and stability in the world. We are privileged to join the ranks of such noted persons as French Marine explorer Jacques Cousteau; Sir David Attenborough, producer of environmental TV-programs, Gro Harlem Brundtland, former Prime Minister of Norway; Amil Aggarwal, the prominent environmentalist from India, Ken Saro-Wiwa, the environmental and human rights activist from Nigeria, now deceased, Jimmy Carter, former President of the United States, Jane Goodall of the UK, the dedicated researcher who lived among the primates in Africa, and the late Chico Mendes, Brazil. Ms, Marilyn Mosley is President of Global 500 Environmental Forum. 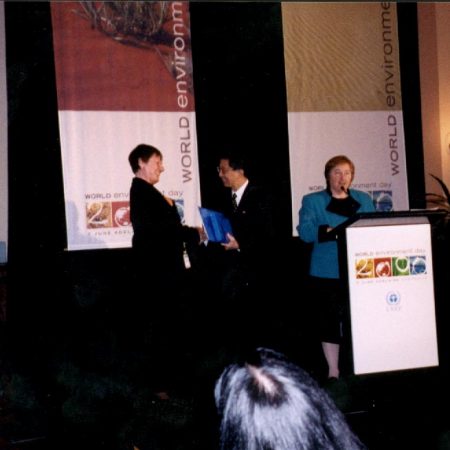