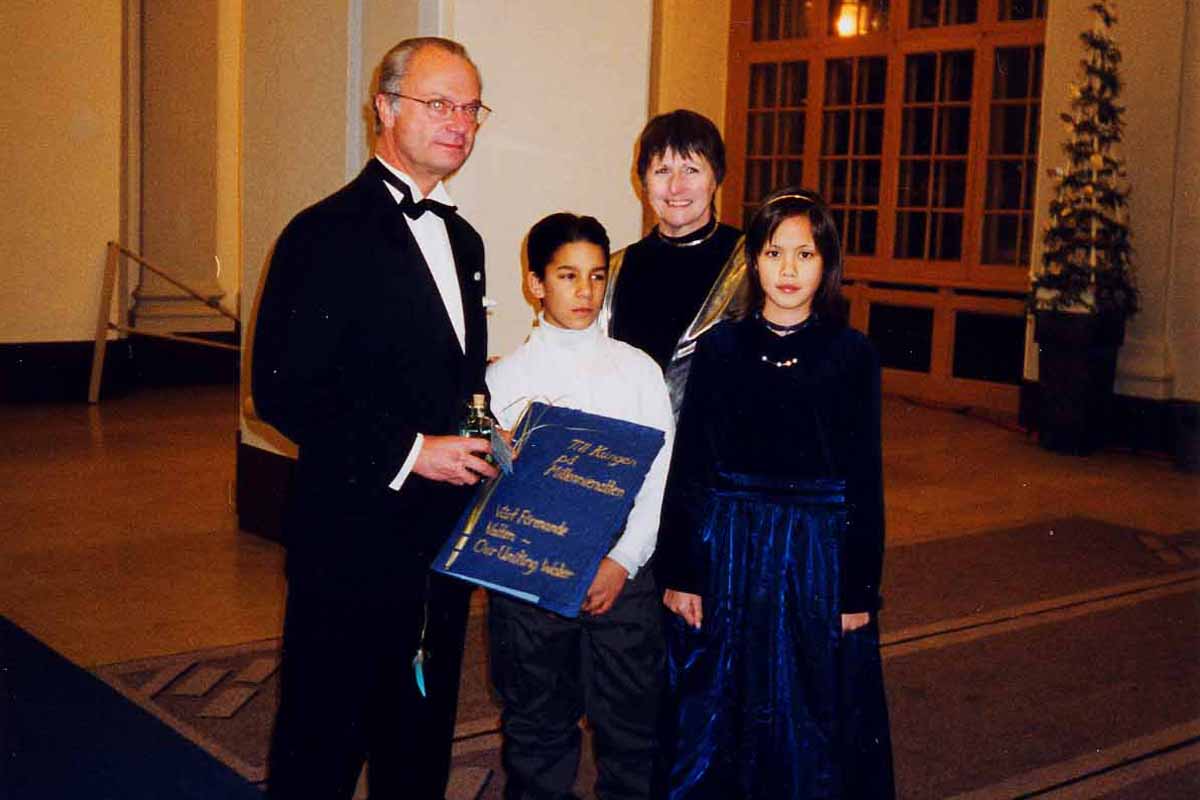 When the clock stroke 12 the Treasure Chest at Stockholm City Hall transformed at the Millennium Night. We then ran in the winter night to the Royal Castle to hand over the first present this Millennium to H.M. King Carl XVI Gustaf at the Royal Castle.

When the clock stroke 12 The Millennium Night we were standing around the Treasure Chest at Stockholm City Hall. At precisely 12 o’clock the Lord Mayor Axel Wennerholm opened the heavy lid of the chest and at that moment the chest was transformed from being the chest of tax money (in the old days!) to be the treasure chest for children’s ideas and visions for the future. It was Elisabeth Klemetz and Andreas Rozario both 12 years who handed over their written messages to the Lord Mayor who with solemnity placed them at the bottom of the chest. The founders of Globetree Kajsa, Sam and Peroy witnessed the transformation ceremony.

At the same time the fireworks sounded over Stockholm and the Millennium toasting and dancing at the Blue Hall and the Golden Room at Stockholm City Hall.
We run to the Royal Castle in the winter night to be there at 1 o’clock sharp and hand over Our Uniting Water to H.M. The king of Sweden – as the first gift this New Millennium. Children from all nations of the world have united water from places they care for. H.M. King Carl XVI Gustaf receives Our Uniting Water from Elisabeth and Andreas and thank them for this special gift. Andreas asks the King: – Where is the Queen? The King replies: – She was not invited. Andreas looks at us in Globetree with accusing eyes: – Did you not invite the Queen? When H.M. the King went back to his party Andreas says to the Marshal of the Court: – The King is great! – I will forward that to the King, says the Marshal with a big smile. With these words the Globetree Millennium program ended. We slowly walked home.
Kajsa wish to add: I called for many weeks to the Marshal of Court to get the opportunity to hand over Our Uniting Water to H.M. the King. The Marshal replied the King will be very busy the Millennium Night with many guests in the Castle. It’s not possible. The day before the Millennium Night I called for the last time: – Have you asked the King? – No I have not. – Please ask the King! In the morning the 31 December the Marshal calls and says: – The King says yes, he will happily receive Our Uniting Water! From that moment – intense activity started in Globetree to make the preparations and rehearse with the children!